Dashboards are no longer available in Quality Clouds and this article is obsolete. Check out our Views pages.

For ServiceNow instances, Quality Clouds displays the results of the scans in the following dashboards:

This is an executive dashboard whose aim is to give at first sight the quality status of the platform with the Quality Clouds for ServiceNow KPIs.

The Executive dashboard covers the metrics for apps with issues and affected area (scalability, upgradeability, security, performance, maintainability, manageability). In the below image, notice the numbers in green colour within each widget. These are the results of the average of all the scans in the last quarter, excluding the most and least configured instances (i.e, the extremes). 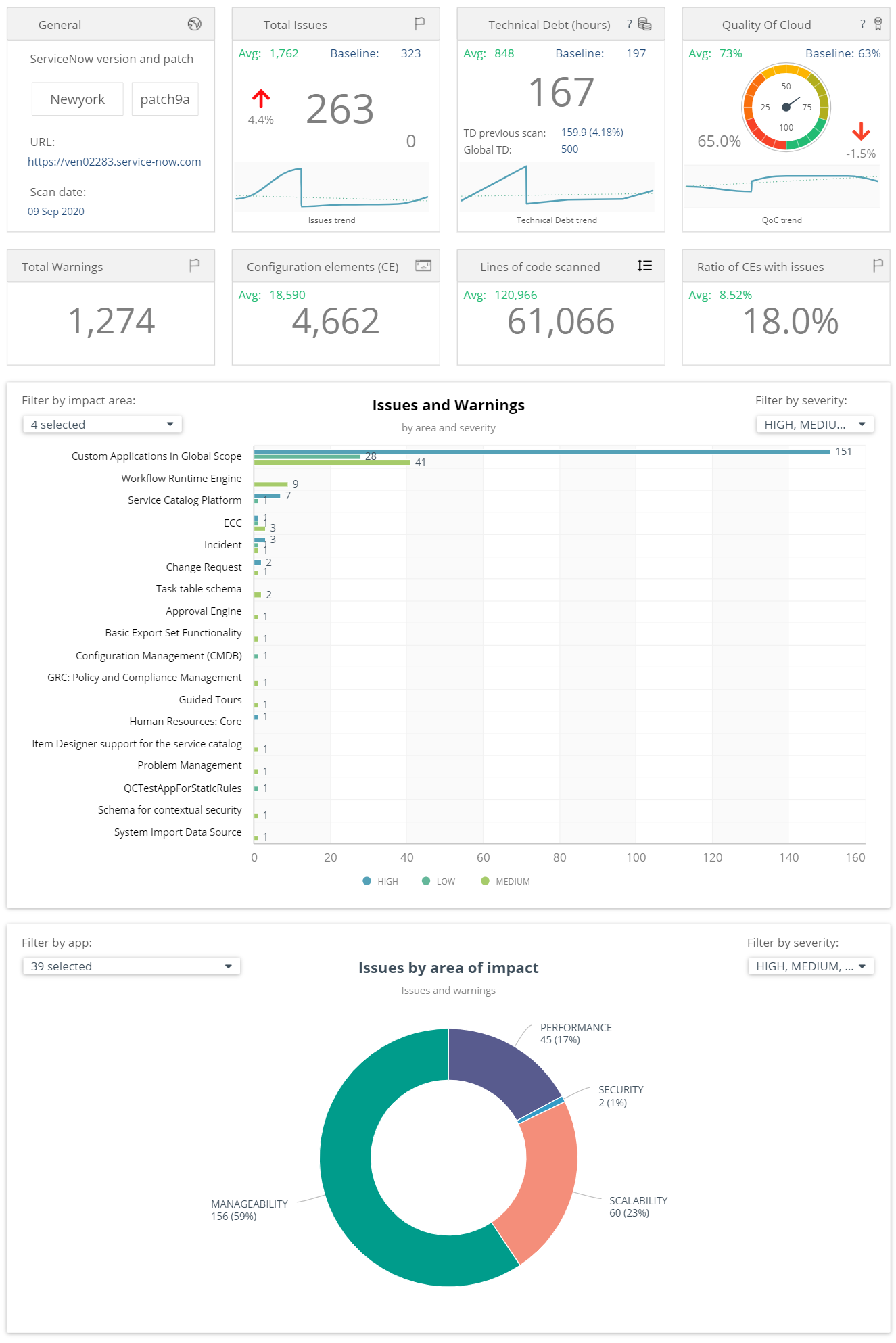 The application overview dashboard is aimed to provide insights about the quality for each application developed/configured in ServiceNow.

The following additional metrics are included by application:

High-level profile view of your instance, which includes all the relevant aggregated KPIs. 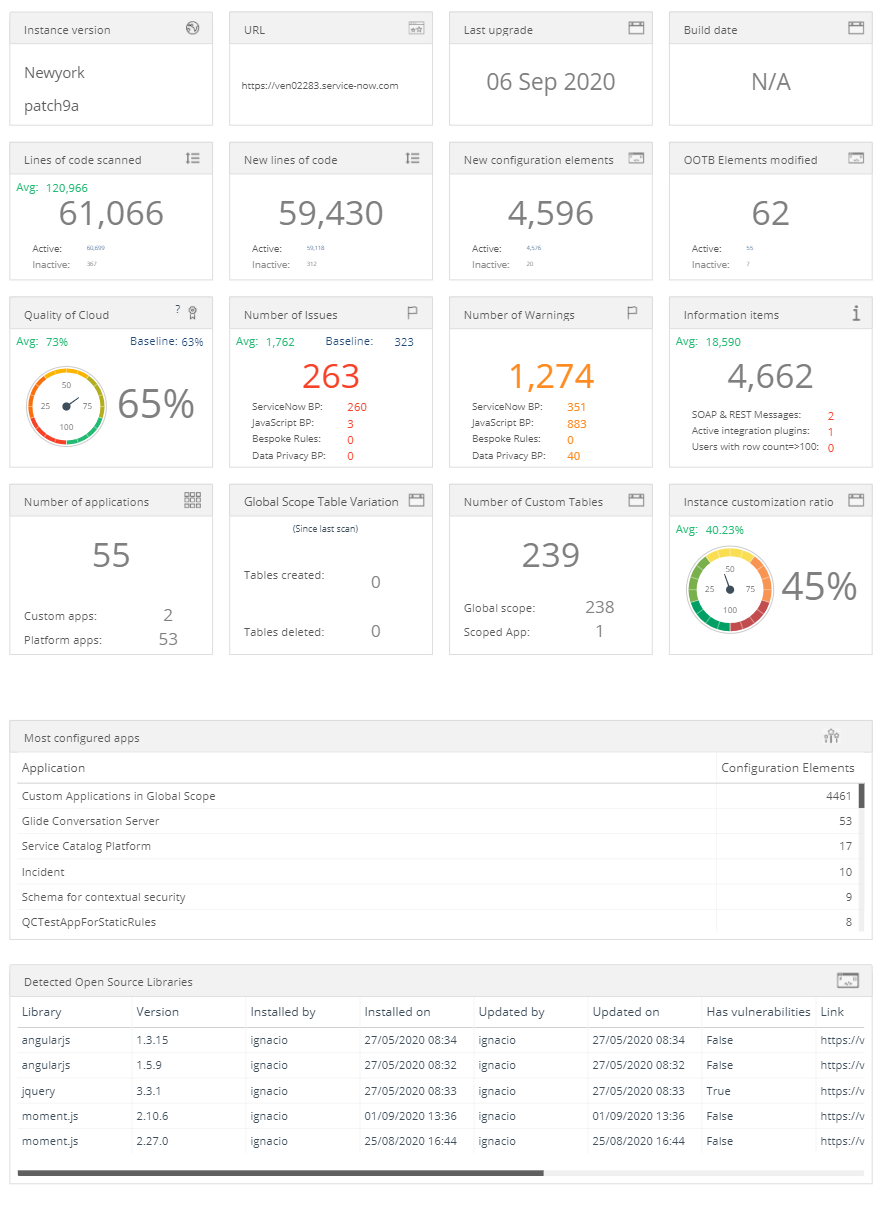 The inclusion of open source libraries may pose a security risk or break Company's policies.

This table displays a list of well-known Open Source packages that were detected in the instance.

The table below displays information of ServiceNow application scoping, which protects applications by restricting access to their files and data: 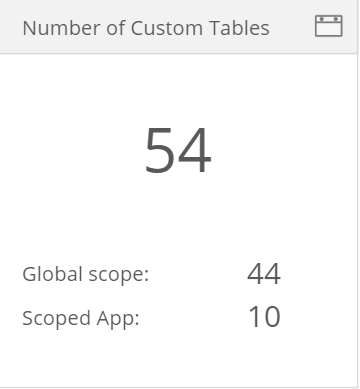 You can now compare selected metrics of your instance to other instances in the Quality Clouds ecosystem by looking at the Average number included. 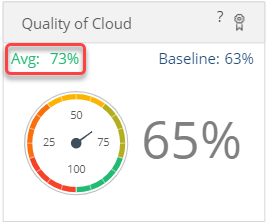 When defining the testing strategy or understanding where the effort has been placed, this dashboard gives insights on this topic. It shows the number of configuration elements added or modified by application. It also helps companies to understand where they need more resources and which sort of them (e.g. if we see change management quite configured, we might need SMEs on that area) or which applications might need more maintenance work. 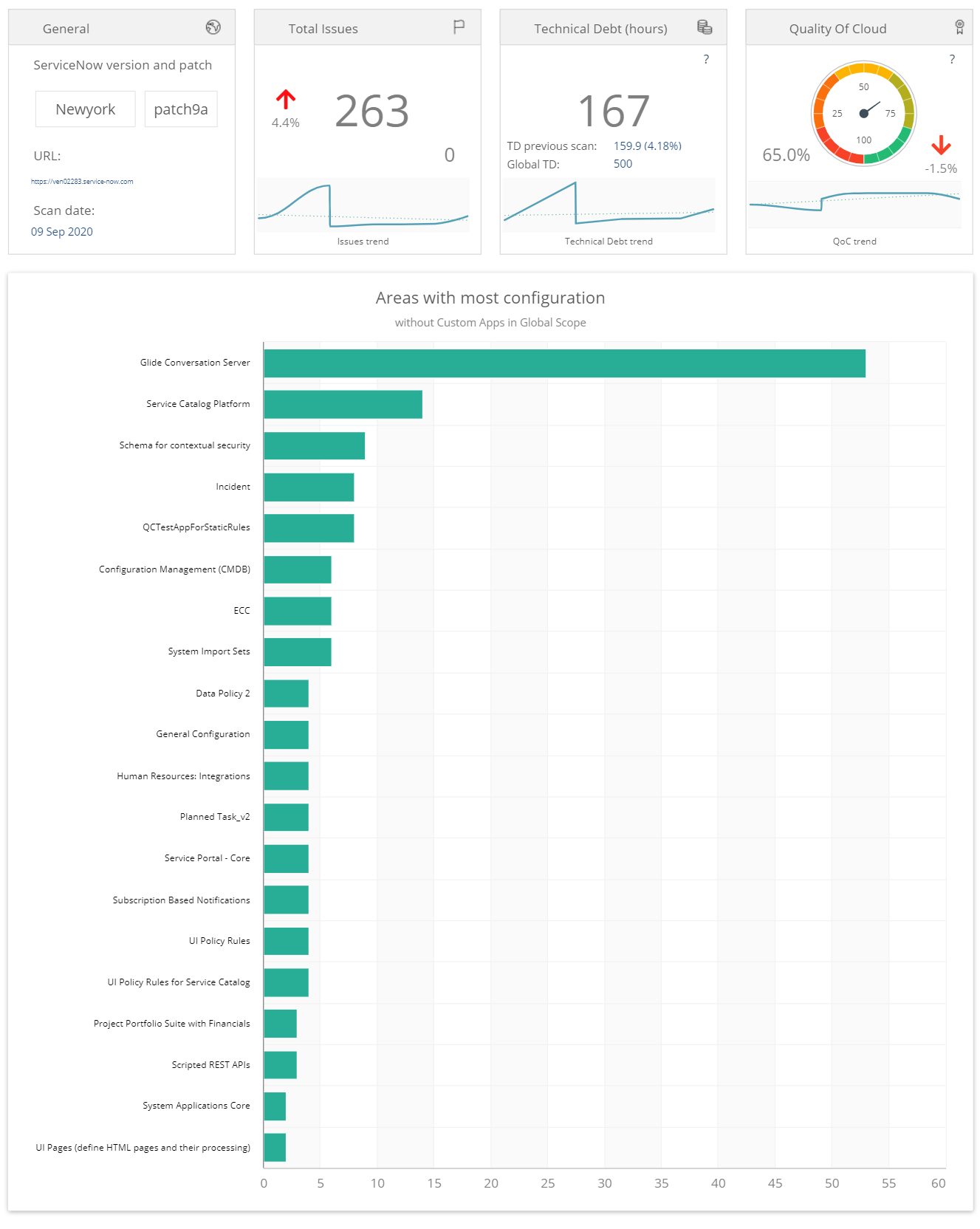 A Time Machine report shows the evolution of the quality in the platform. 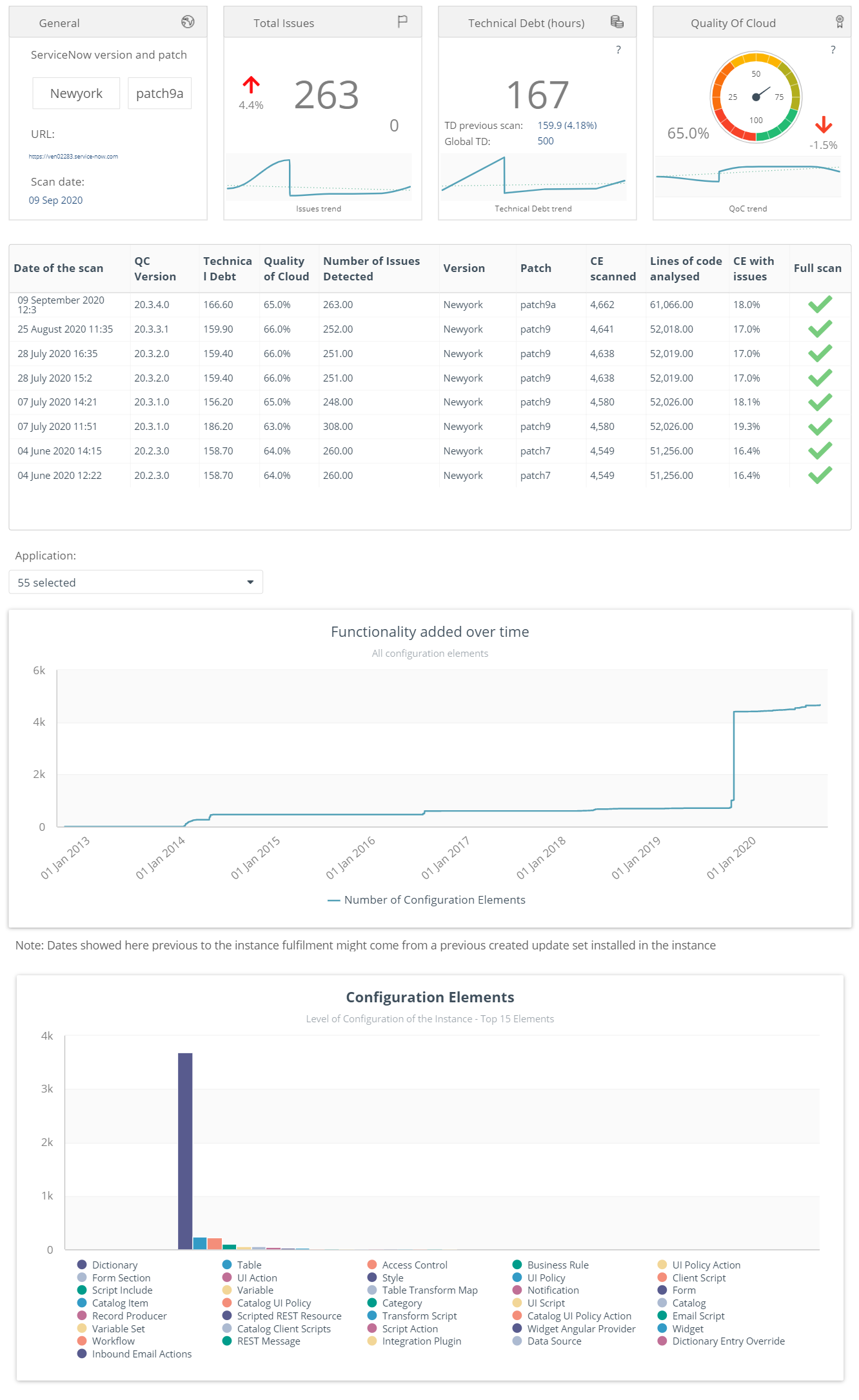 A report that shows the evolution of the quality in the platform viewed by the number of issues. 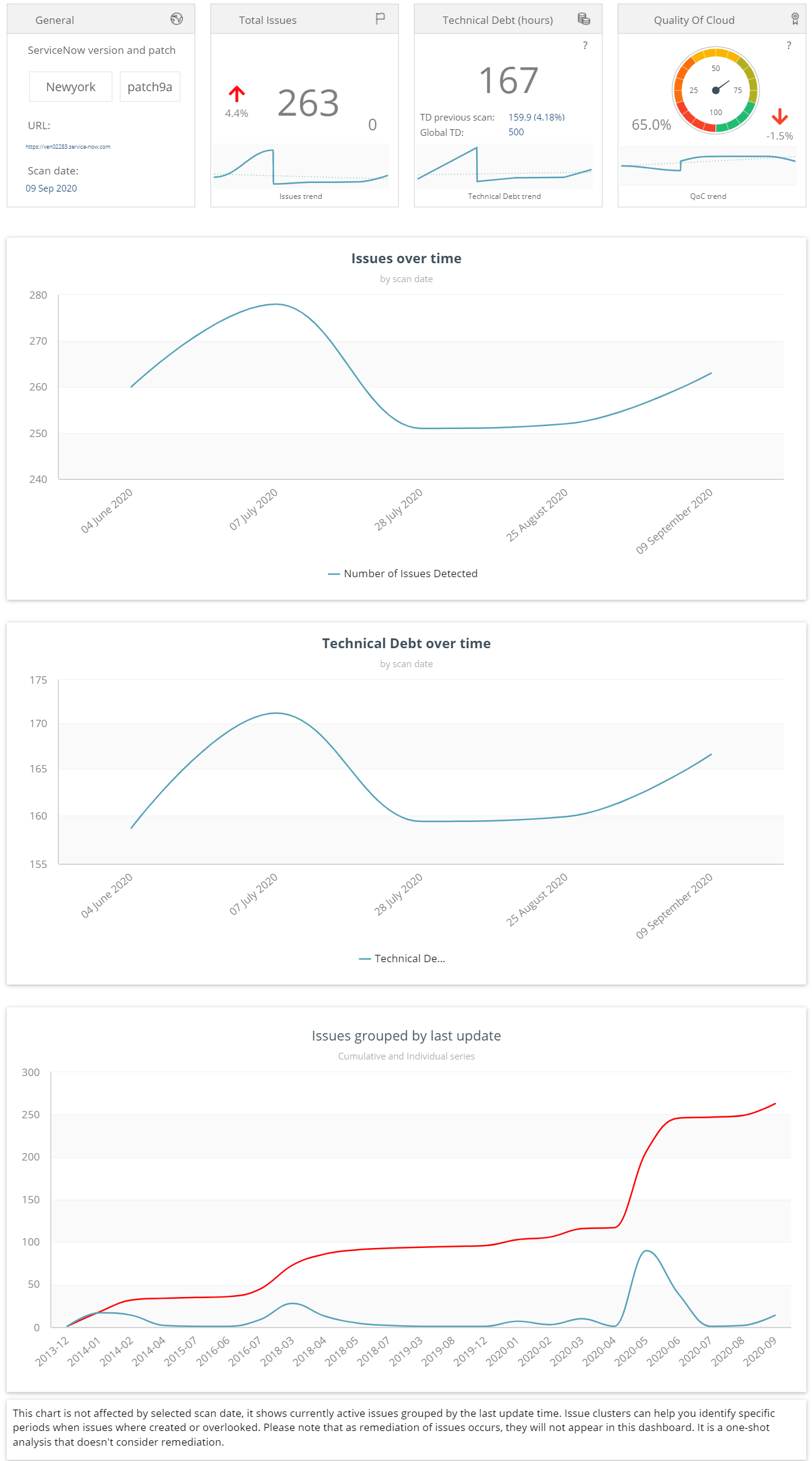 The team dashboard is your existing data classified by developers or teams of developers. There are three main tables with an amplitude of information:

This report allows the comparison of findings across different scans. In successive scans, this dashboard is useful to easily comprehend which areas and best practices have been solved (or where issues have increased). 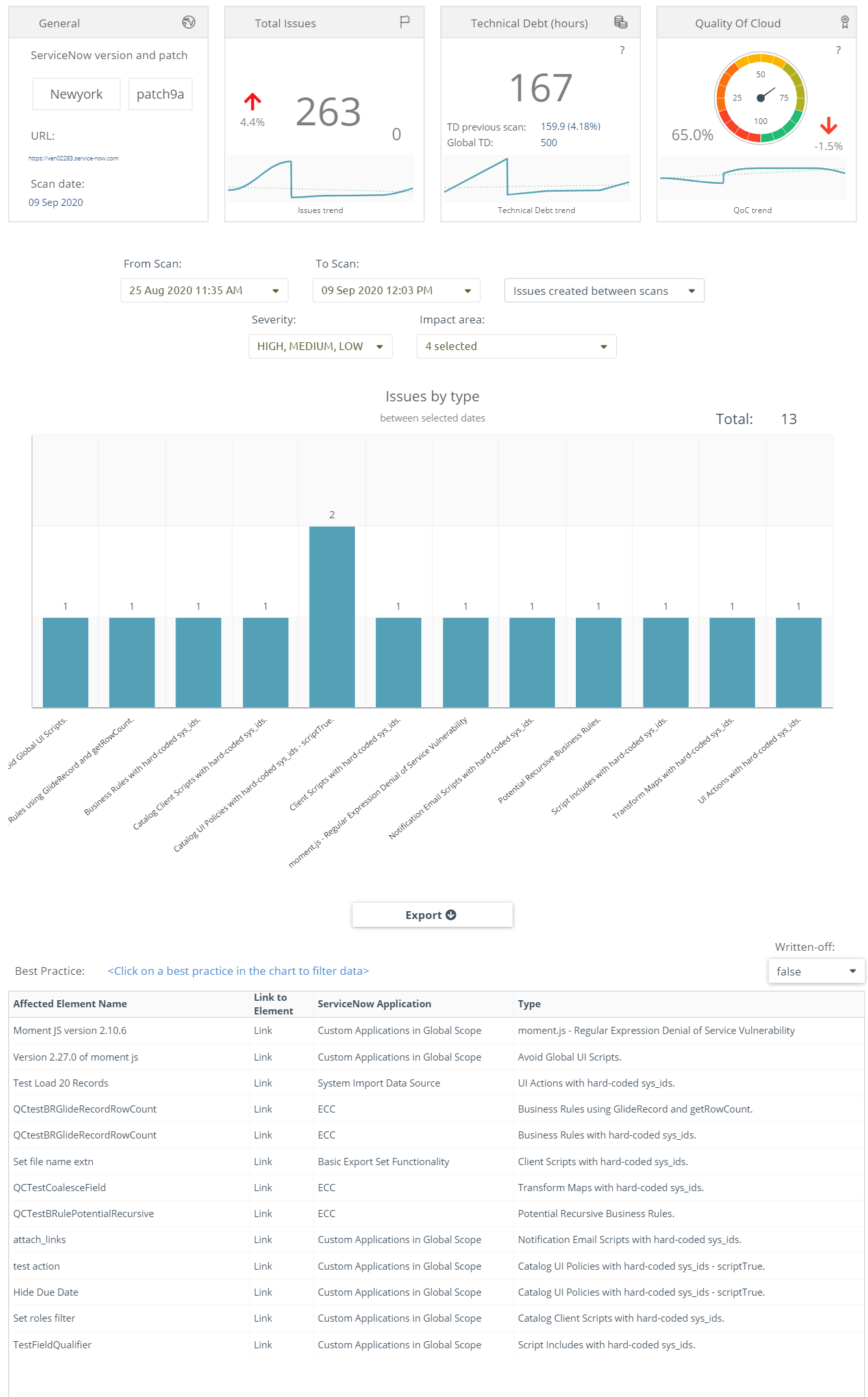 The multiple instances comparison dashboard for ServiceNow is the perfect command and control panel to ensure that your instances are aligned. This is the ideal tool for a release manager who wishes to manage multiple instances. It contains also information about the configuration elements added into each instance as well as the number of integrations for each of them.

To understand the meaning of each metric, go to the section above about the Application overview dashboard. 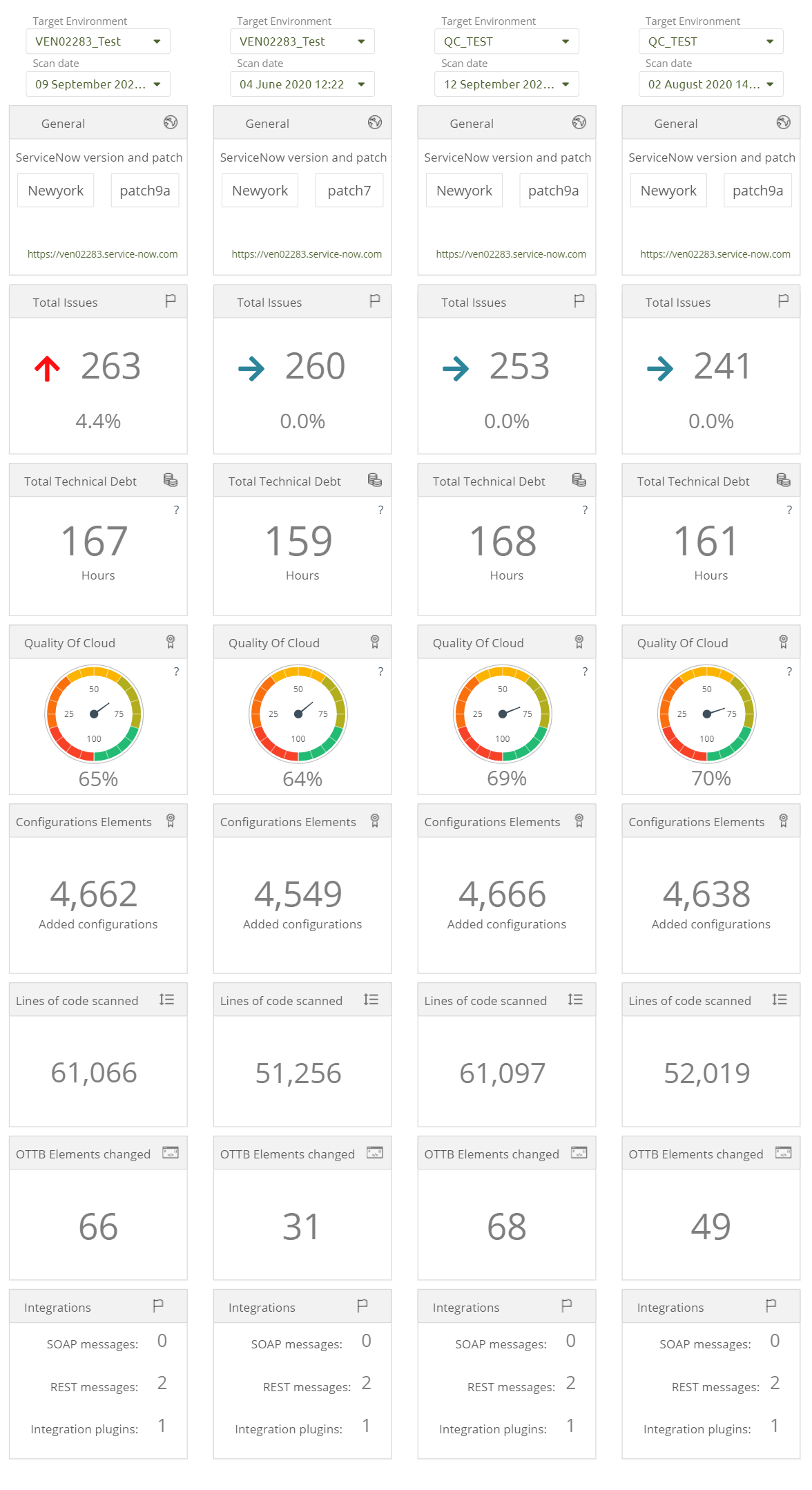 The upgradeability dashboard is particularly useful to avoid problems during ServiceNow version upgrades. The dashboard shows a list of all Out of the Box elements which have been modified in your instance. These configuration elements may be affected in a future upgrade, in which case it will be necessary to manually review them, and decide on the appropriate action.

By monitoring the information displayed on this dashboard, you can question the need to modify an Out of the Box element as soon as such a modification is performed, rather than having to wait a few months until the next upgrade cycle.

The dashboard is made up of the following sections:

Graph for out of the box modifications

This section summarizes the OOTB modifications detected in the instance over time.

Detailed information for out of the box modifications

This section visualizes the OOTB modifications detected in the instance - per developer, per type and per application.

List of out of the box elements affected in future upgrades

This list shows the OOTB modifications which will be affected in upcoming upgrades. Note that this list is based on a ServiceNow instance with the following plugins installed. So you may see some skipped records in your instance if it includes plugins not in the above list. Also, Configuration Element types not included in a scan will not be highlighted in this list, but they should be or priority 3 or below, since all the code Configuration Elements are included.

This report lists the web services defined in your instance with the date and developer. It can be used to do housekeeping as well as to understand the configuration when we want to compare with other instances. It contains all SOAP and REST messages defined in the platform. 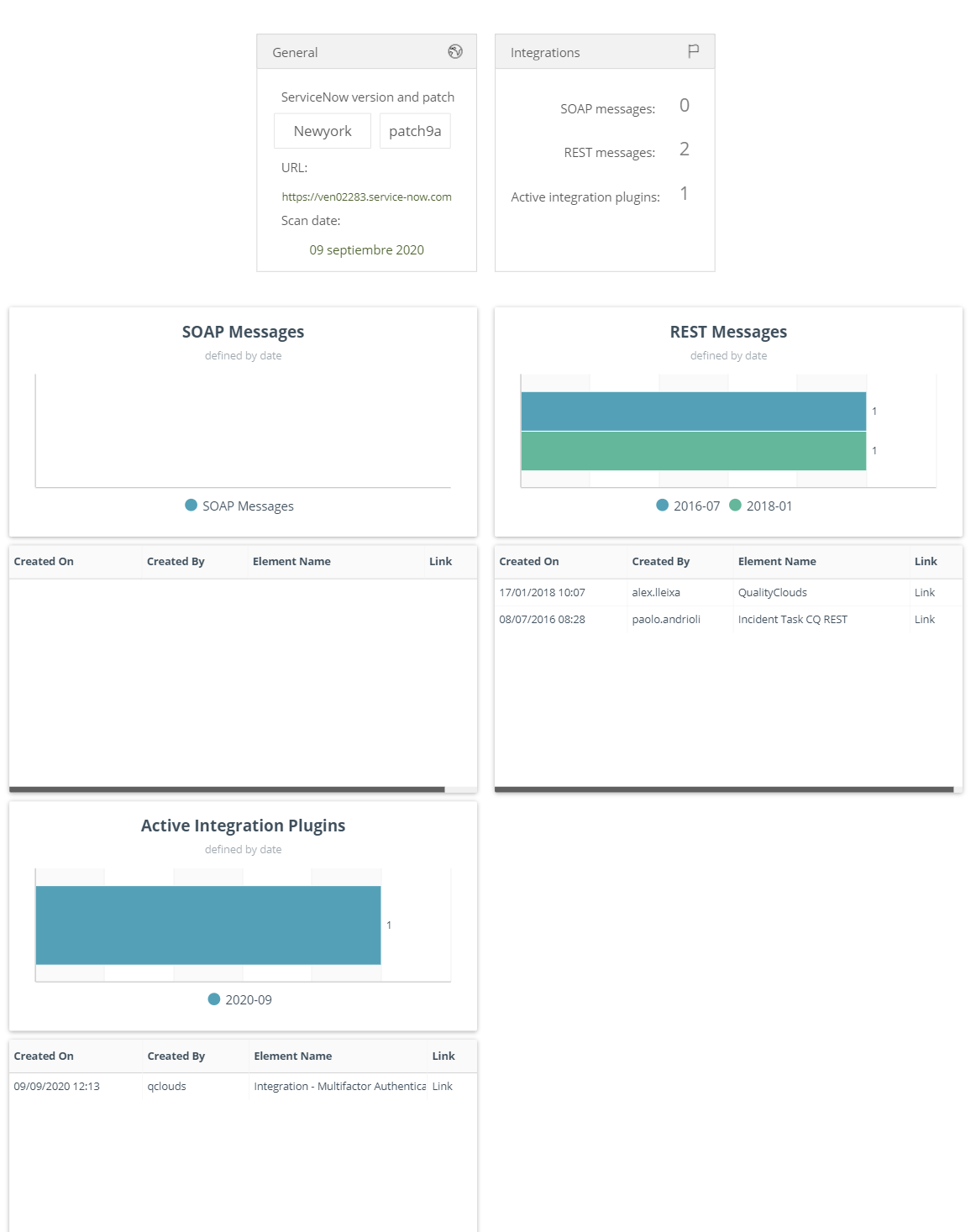 This dashboard provides you with a comprehensive list of violations by type, which can be filtered by 4 levels of severity issues, Impact Area and specific Best Practices. 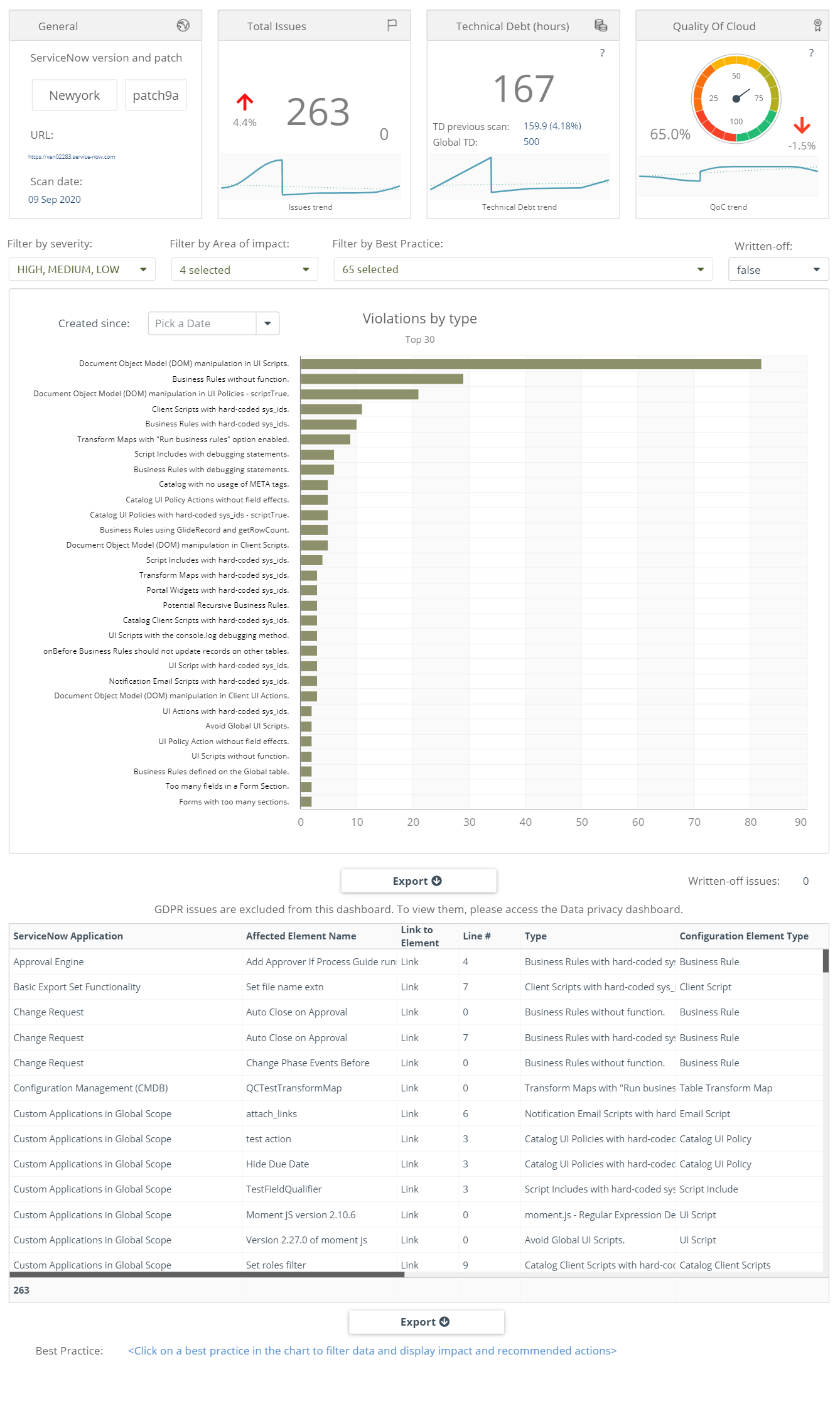 Click on an individual Best Practice to display a detailed description of the impact and the recommended actions you should take to fix the issue.

The Application Governance dashboard monitors the information for every individual set of applications.

Some of the definitions for key metric categories can be appreciated here:

New LoC analyzed: New lines of code are the lines of code added to the instance without considering any OOB (out-of-the-box) changes. The comparison is according to the scan date selected in the box above.

Global scope: this category is the result of scan instance(s) that doesn't apply to a single application.

The different categories of applications listed provide you information about the number of CE and LoC analyzed.

In the Select app section of the dashboard, you can filter through the different applications and view the CE types in a table. Additional information with a list of CEs can be viewed in the last table with an option to export files in .csv format. 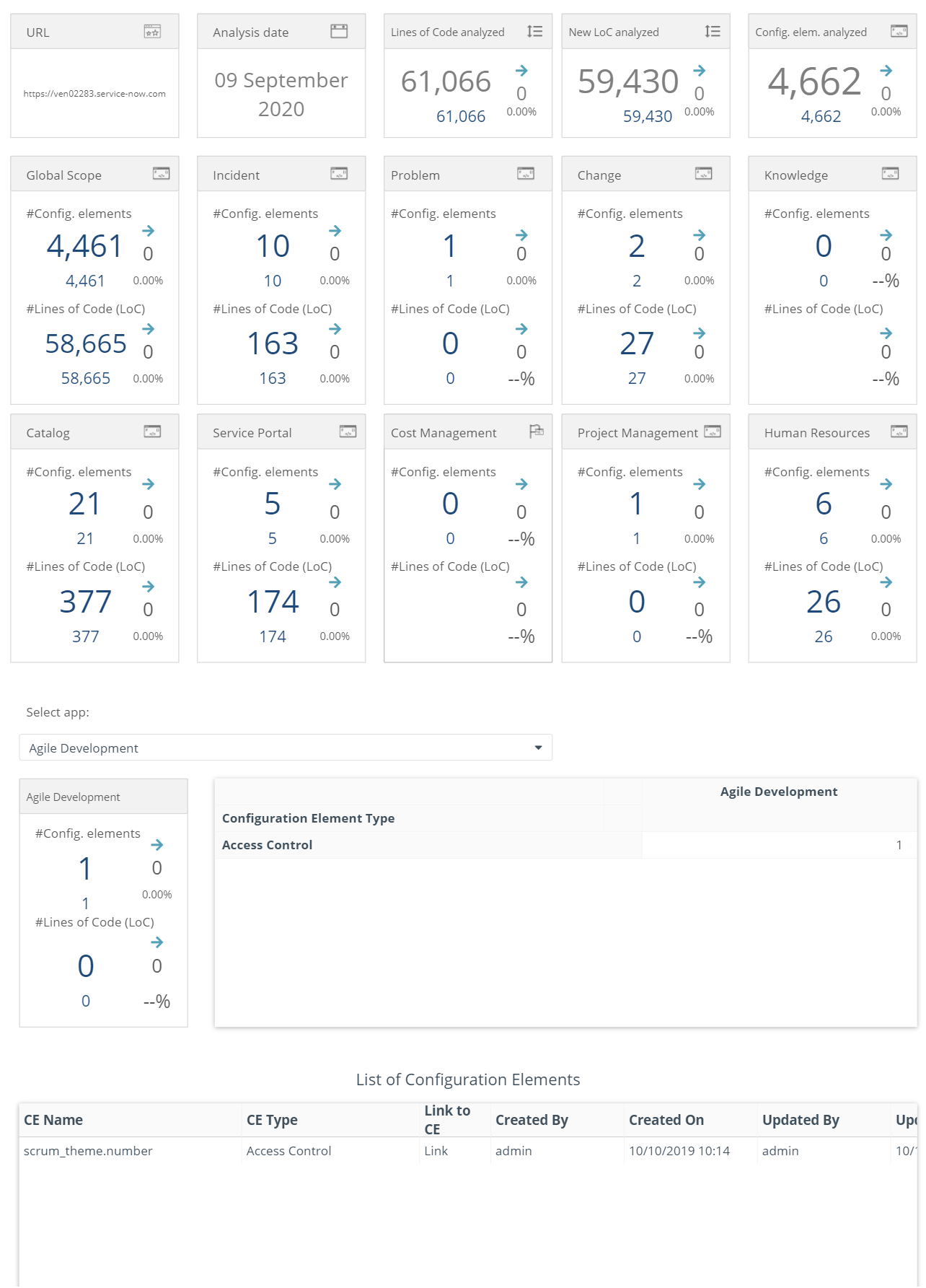 The data privacy dashboard can provide an assemblage of collected or processed personal data for use. 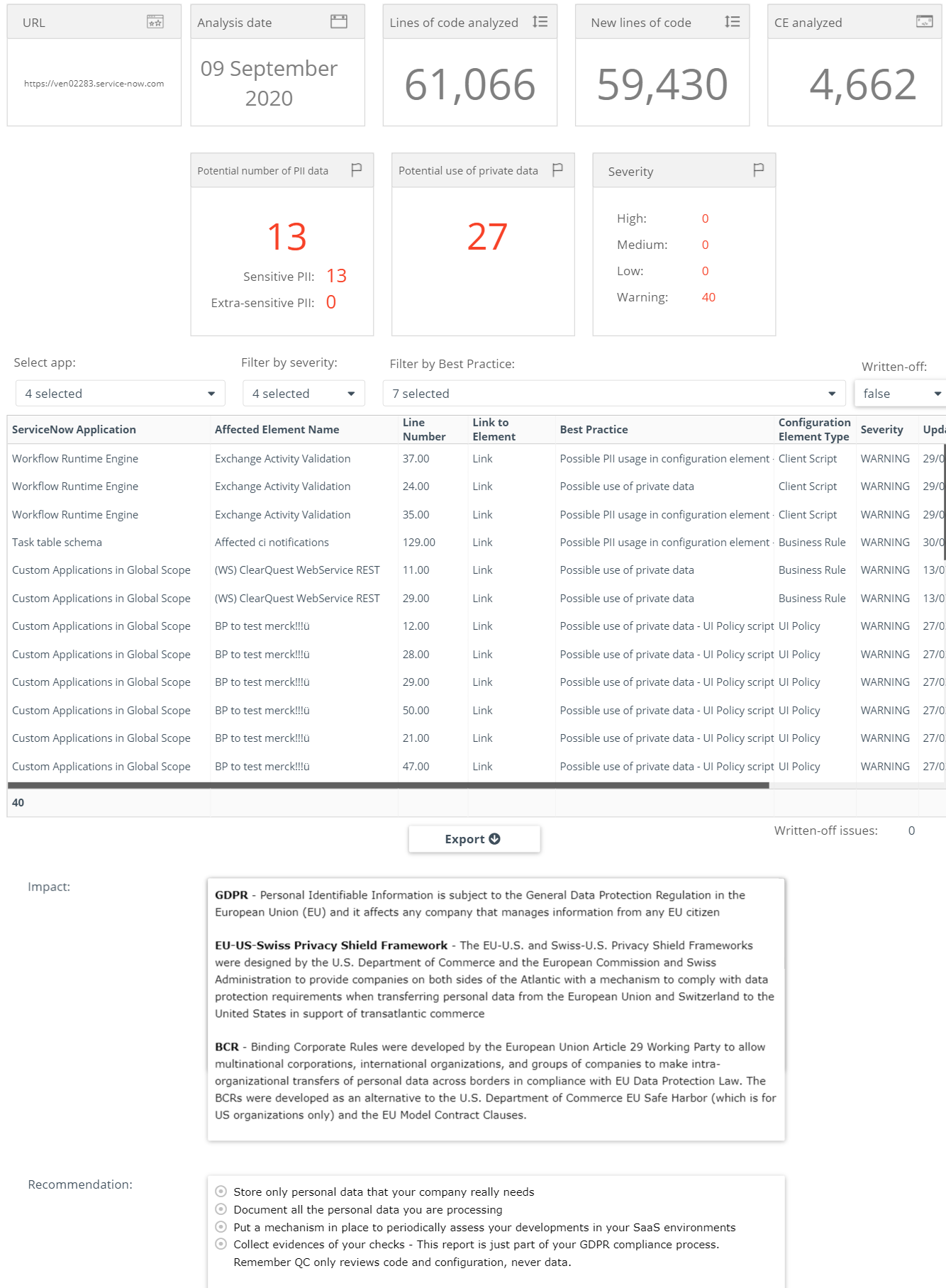 In the Data Privacy dashboard you can view the ServiceNow application and view the Affected Element Name by browsing through the following table.

The categories in the table are defined in the following sections:

The Catalog Overview dashboard provides an overview of all the Catalogs configured in the ServiceNow instance. All the main Configuration Element types and issues related to Catalog elements are included in this dashboard. 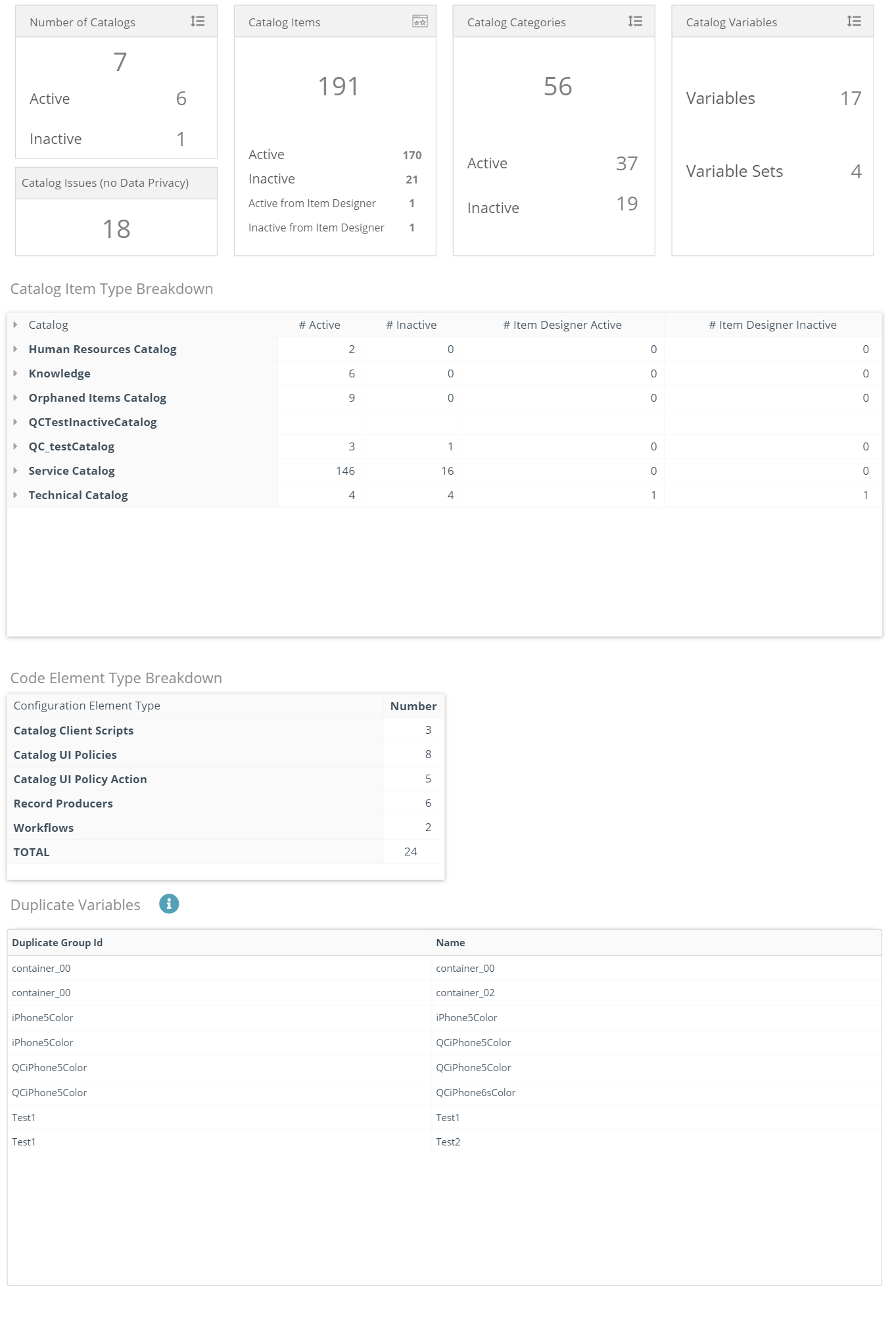 A breakdown of all Items by Catalog and Item type is also provided, including again the number of items created from the Item Designer tool. Note: Any Item which is not associated with a Catalog is listed under the "Orphaned Items Catalog", and should be investigated.

Catalog Variables whose names match or are similar are shown, grouped by the first member of the group (using a lexicographic sort on the variable name). Many groups, or groups with a lot of members, indicate that some refactoring could be beneficial, using Catalog Variable Sets.

Any issue detected on a Catalog-specific Configuration Element is also shown in this dashboard.

The Catalog Details dashboard provides a detailed view of each of the Catalogs configured in the ServiceNow instance. 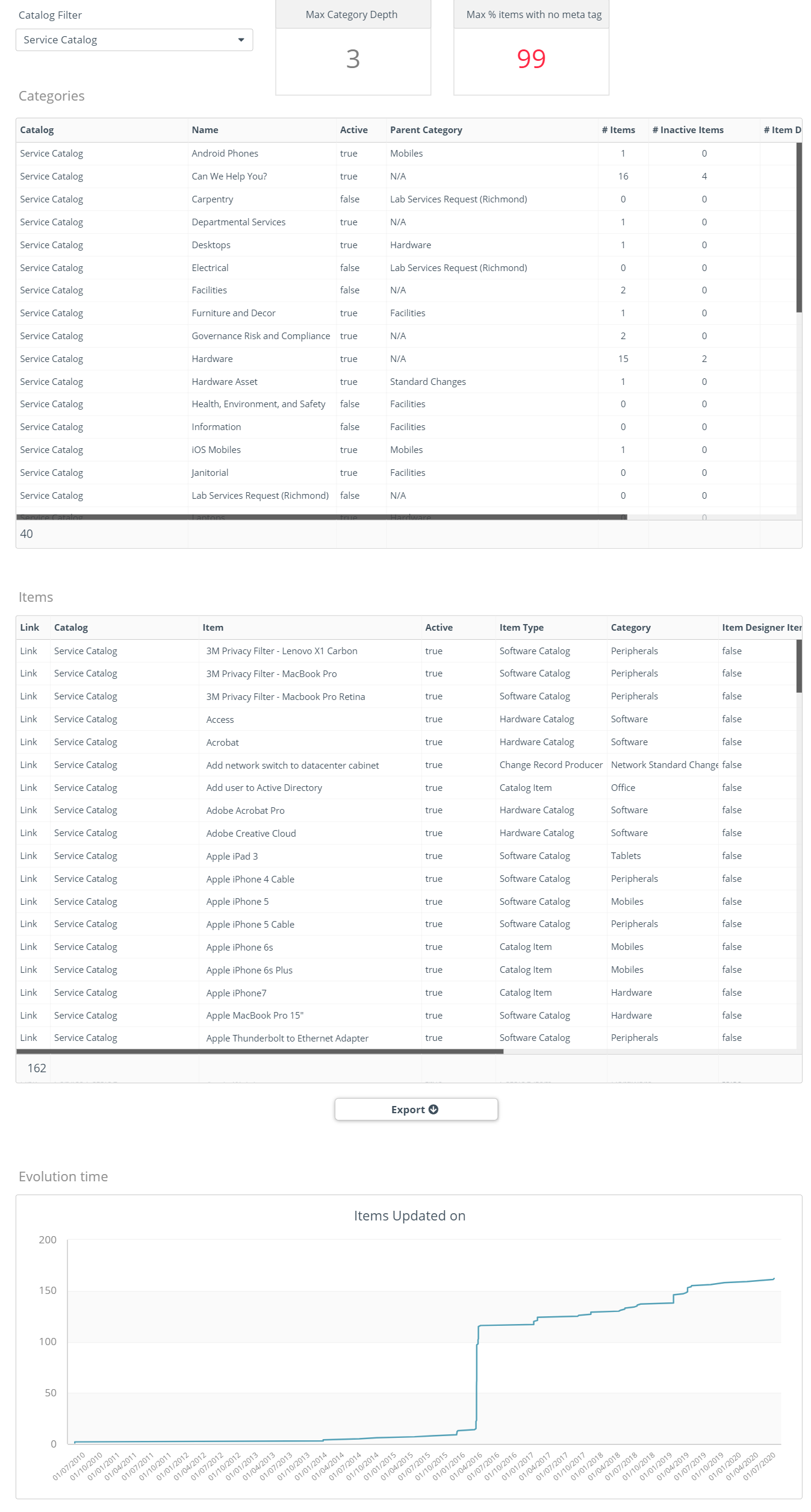 Maximum Category Depth. This indicates the number of nested Categories present in the selected Catalog. A depth higher than 3 does not contribute to a good user experience, and is highlighted in red.

Catalog Categories. For the selected Catalog, all its categories are shown, including their parent category, and the number of active / inactive items in each category. The use of Item Designer items is also highlighted.

Catalog Items. Each item in the selected Catalog is shown individually. A link is provided so that the definition of the Item can be accessed on the ServiceNow instance.

The dashboard helps you identify the extent to which your instance is customized versus configured. The more customized an instance is, the more difficult is its maintenance. 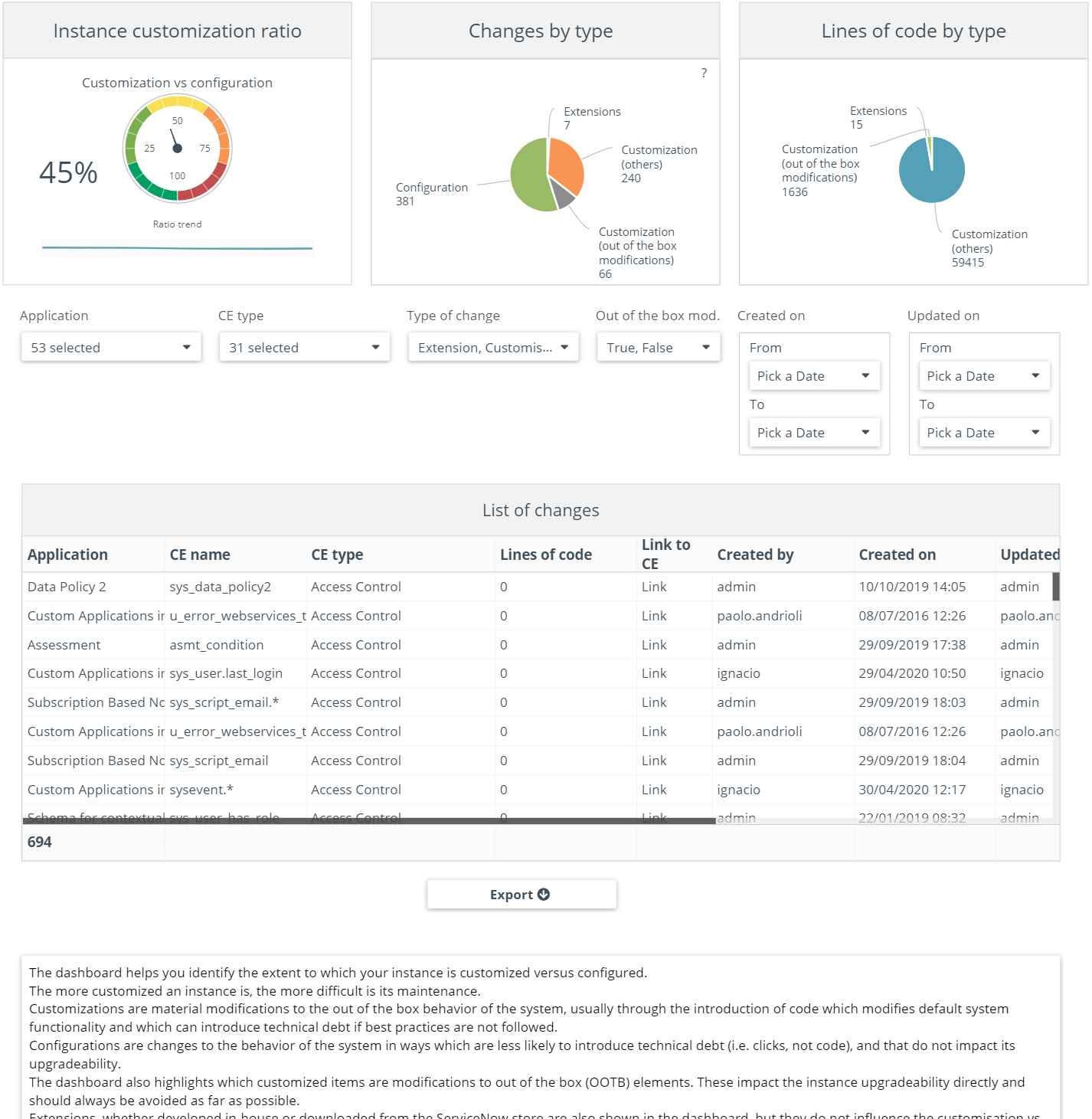 Customizations are material modifications to the out of the box behavior of the system, usually through the introduction of code which modifies default system functionality and which can introduce technical debt if best practices are not followed.

Configurations are changes to the behavior of the system in ways which are less likely to introduce technical debt (i.e. clicks, not code) and that do not impact its upgradeability.

The dashboard also highlights which customized items are modifications to out-of-the-box (OOTB) elements. These impact the instance upgradeability directly, and should always be avoided.

Scoped applications, whether developed in-house or downloaded from the ServiceNow store are also shown in the dashboard, but they do not influence the customization vs configuration ratio, since they extend the capabilities of the instance rather than modifying them.

Lines of code by type shows the distribution of the number of lines of code between customization - i.e. the out of the box modifications and the others, and the extensions.

The Alerts dashboard provides an overview of all the operational alerts defined on the instance, highlighting the alerts that have been triggered. 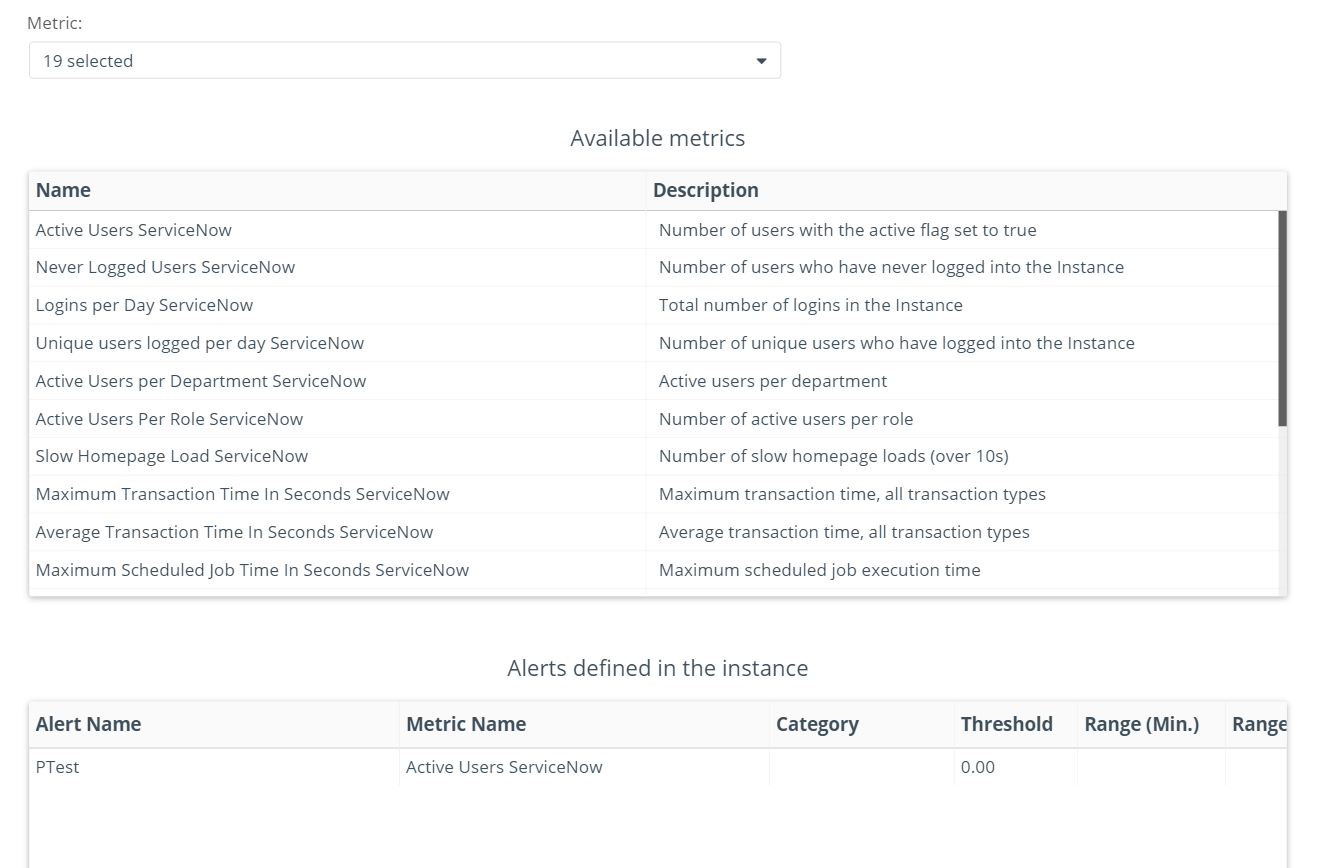 Our new development report is out and features insights into how ServiceNow platforms evolved over the last year.